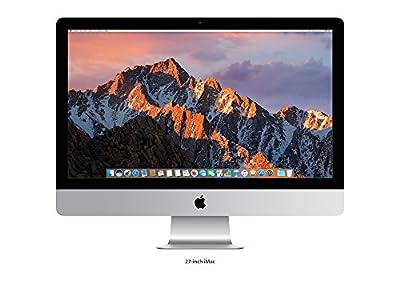 Price: $3,000.00
As of 2020-05-04 18:14:32 UTC (more info)
Product prices and availability are accurate as of 2020-05-04 18:14:32 UTC and are subject to change. Any price and availability information displayed on https://www.amazon.com/ at the time of purchase will apply to the purchase of this product.
Availability: Not Available Discontinued
Buy Now from Amazon
Product Information (more info)
CERTAIN CONTENT THAT APPEARS ON THIS SITE COMES FROM AMAZON SERVICES LLC. THIS CONTENT IS PROVIDED 'AS IS' AND IS SUBJECT TO CHANGE OR REMOVAL AT ANY TIME.

The iMac "Core i7" 3.4 27-Inch Aluminum (2011/2012) originally was offered as a "configure-to-order" configuration of the iMac "Core i5" 3.1 27-Inch Aluminum, but it later was offered a standard configuration, as well. Other than processor (and the corresponding level 3 cache), these two models are identical. The iMac "Core i7" 3.4 27-Inch Aluminum (2011/2012) is powered by a Quad Core 3.4 GHz Intel "Core i7" I7-2600 (Sandy Bridge) processor with a dedicated 256k level 2 cache for each core and an 8 MB shared level 3 cache. In lieu of a system bus, it has a "Direct Media Interface" (DMI) that "connects between the processor and chipset" at 5 GT/s. If only the processor is customized, it is configured with 32 GB of RAM (1600 MHz PC3-12800 DDR3 SDRAM), a 2 TB SSHD (solid state hybrid) hard drive, a vertically-mounted slot-loading DVD'R DL "SuperDrive", and AMD Radeon HD 6970M graphics with 1 GB of dedicated GDDR5 memory. It also has a built-in "FaceTime HD" video camera and built-in stereo speakers underneath the 27" glossy 16:9 LED-backlit TFT Active Matrix LCD (2560x1440 native) display "with IPS technology". Connectivity includes four USB 2.0 ports, a Firewire "800" port, built-in AirPort Extreme, Gigabit Ethernet, and an SDXC card slot as well as dual "Thunderbolt" ports that are backwards compatible with Mini DisplayPort and, likewise, each support an external display up to 30" (2560x1600). Thunderbolt also supports other peripherals that use the Thunderbolt standard which provides up to 10 Gbps of bandwidth in both directions. Externally, the iMac line uses the same "edge-to-edge" glass design and "seamless all aluminum enclosure" as the "Mid-2010" models that came before them. Internally, however, the "2011/2012" line is equipped with faster processors and faster graphics processors, as well as the aforementioned external improvements of a higher resolution (and wider angle) webcam and Thunderbolt.