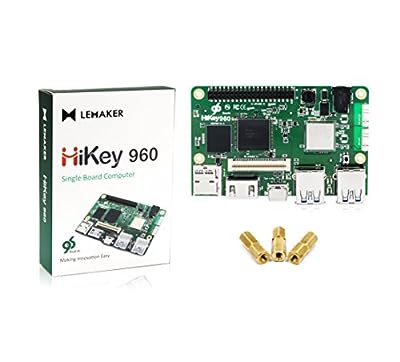 Price: Click Button for Price
As of 2022-04-12 19:18:18 UTC (more info)
Product prices and availability are accurate as of 2022-04-12 19:18:18 UTC and are subject to change. Any price and availability information displayed on https://www.amazon.com/ at the time of purchase will apply to the purchase of this product.
Availability: Not Available Discontinued
Buy Now from Amazon
Product Information (more info)
CERTAIN CONTENT THAT APPEARS ON THIS SITE COMES FROM AMAZON SERVICES LLC. THIS CONTENT IS PROVIDED 'AS IS' AND IS SUBJECT TO CHANGE OR REMOVAL AT ANY TIME.

HiKey 960 Single Board Computer is the most powerful ARM-based single board computer utilizing the latest Kirin 960 System-on-Chip. Playing a central role in successful Android phones such as the Huawei Mate 9 and Porsche Design models, the Kirin 960 incorporates the latest core architectural technologies from ARM like the new Cortex-A73 CPU and the Mali G71 GPU. Excellent performance and power efficiency enables developers to explore a realm of new applications in virtual reality, computer vision, machine learning, and artificial intelligence using a validated, compact, and cost efficient platform package. Built on top of industry computing standards such as Google's Android Open Source Project, Khronos OpenCL 2.0, and Vulkan APIs. Make innovation easy and prototype the next generation of applications with this board today! The explosion of the Internet-of-Things (IoT) market creates an imperative need for a collaborative ecosystem to tackle issues of correctness, composibility, and security in hardware and software design. Google and Linaro recognizes the role that standards and APIs play in frameworking designs. Google's Android Open Source Project and Linaro's 96Boards initiative work together to bring developers the latest software and hardware technologies necessary to prototype projects with fewer legacy encumbrances. Get going quickly with the latest software APIs while running on validated inter-operable hardware.
View our full range of Shenzhen Lemaker Technology Coltd products